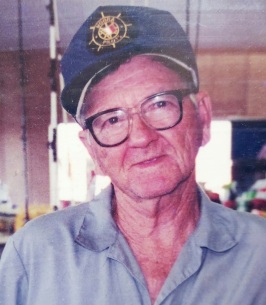 Curtis "Be'be' " Vizier was born on March 13, 1932 in Golden Meadow, La, but lived in Grand Isle on Santiny Lane for all except the first 6 months of his life. There was no place he loved more than Santiny Lane in Grand Isle. It's the only place he ever wanted to be.

He grew up in 1930s Grand Isle, a beautiful place for a young child to explore, go swimming and be free. He attended Grand Isle School until he decided to quit school in the 6th grade. He met Norma Cheramie and they married in 1950. He made a living by trawling, crabbing and had an oyster lease where he worked hard gathering and opening and selling oysters with his wife, even after he had polio at the age of 29. It was when he was in an oyster bed that he found an old bottle .This developed into a 40 plus year hobby of treasure hunting on the island, collecting all sorts of buried "treasures" buried in the sand and mud by time and hurricanes. He and his extensive bottle collection were featured on a PBS documentary about LA Highway One.

Bebe was always building things from his own house to several boats, outbuildings, cabinets, shelves. He loved to work with wood. Watching movies and documentaries of WW2 and old TV cowboys were a favorite pastime of his. He was also a good cook, as most Cajun men are. He loved birds. He had pigeons, cockatiels, lovebirds, African greys, and doves.

He was preceded in death by his parents, Felicien and Sylvia Esponge Vizier, his beloved wife, Norma Cheramie Vizier, his brothers Ojes and Adam Vizier and sister Vernice Vizier Brunies.

Be'Be' is survived and will be missed by his daughter Janis Nihart, son in law Dennis Nihart, daughter Donna Beverly, grandchildren David, Paul, and Jordan Nihart, and 2 grandchildren Claire and Mary Nihart and one brother,Harris Vizier of Marrero, La.

Bebe passed from this life into the next on February 5, 2022. He is finally and completely healed of all his afflications and is with his Savior in Heaven.

Our sincere gratitude goes out to all the wonderful people at the Columns Community Care Center and Rapides Hospital, Young's Funeral Home ,and especially to Latonya Napoleon, who was with him and held his hand as he passed away.