To share your memory on the wall of James Hutchins, sign in using one of the following options:

He was born on June 30, 1936 to the union of Maude and Ivy Hutchins of Harrisonburg and passed from this life on Thursday, May 13, 2021. He spent his childhood years growing up on the Ouachita River. He was a 1954 graduate of Harrisonburg High School and attended Louisiana State University for two years with an interest in agriculture. Upon his return to Catahoula Parish, he married Levy “Prue” Davis Hutchins of Jonesville. They began their life together in Monroe, Louisiana where he retired with A & M Railroad followed by a career with Metropolitan Life Insurance. In 1974, he moved his family back to Enterprise and began to fulfill his desire to farm with his brother. As a child he loved music and purchased his first guitar from Sears Roebuck at the age of 12. This would be the beginning of a lifelong passion which transferred to his children and grandchildren. He began a tradition of taking all four grandchildren to Branson or Nashville every year and to them he was an unforgettable character by the way he showered them with laughter, especially during their time of heartache and tragedy. In his younger days, he was a member of several bands having been most successful with recording artist Gene Stewart and the Country Rebels. He eventually began performing in gospel groups such as Glory bound and additional church venues. He was a proud member of New Ouachita Baptist church and served as a deacon and song director for nine years. Later during his life, he joined the First Baptist Church of Jonesville where he also provided music on occasion. Before his last breath was taken, he was still singing and now he has joined the heavenly choir with his mother and grandson who also loved music. Even the horrible disease of dementia could not steal his voice and he proudly sang songs of old country classics and gospel standards such as “Sweet By and By” and “Victory in Jesus”.

He was preceded in death by his parents, his grandson, Drew Rodney Hutchins and his daughter-in-law, Dania Lewis Hutchins. Those left to cherish his memories are his wife, Prue Hutchins; his son, James Rodney Hutchins and wife Susan of Harrisonburg; his daughter, Ronda Hutchins (Richardson) of Monroe; grandchildren, James (Jamie) Carl Girod and wife Heather of Slidell, Charly Girod Darmstaedter and husband John of Sterlington, Lacy Hutchins Evans and husband Matt of Jena. Brother, Glendon Hutchins and wife Penny formerly of Harrisonburg but now reside in Hawaii. Great-grandchildren; Adalida Joy Darmstaedter, Alexandra James Darmstaedter, Colt Jeffery Girod, and Jasper Drew Evans. He is also survived by a host of nephews, nieces and friends.

In lieu of flowers the family requests that donations be made to the Alzheimer's Foundation or St. Jude’s Cancer Research.

The family will receive friends at Young’s Funeral Home in Jonesville on Saturday, May 15, 2021 from 5PM until 7PM.

To leave an online condolence for the family please visit www.youngsfh.com.
Read Less

To send flowers to the family or plant a tree in memory of James Hutchins, please visit our Heartfelt Sympathies Store.

Receive notifications about information and event scheduling for James

There are no events scheduled. You can still show your support by sending flowers directly to the family, or planting a memorial tree in memory of James Hutchins.
Visit the Heartfelt Sympathies Store

We encourage you to share your most beloved memories of James here, so that the family and other loved ones can always see it. You can upload cherished photographs, or share your favorite stories, and can even comment on those shared by others. 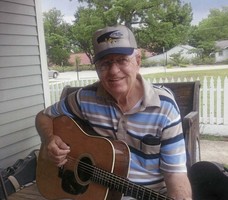