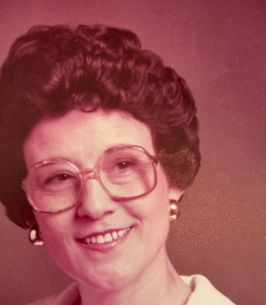 Funeral Services for Johnnie Ruth Wilson Freeman, age 88, of The Woodlands, TX will be held at
Youngs Funeral Home, in Jonesville, Saturday, July 16th from 8:30 to 9:30 am
under the direction of Young's Funeral Home. Graveside
service will follow at Galvin's Creek Cemetery in Whitehall, LaSalle Parish. All are
welcome. She will be buried next to her late husband, her mother,
maternal grandmother, brother, and other extended family.

Johnnie was voted Miss Catahoula in 1949, and was state parliamentarian for the
Louisiana Home Economics Association that same year. Johnnie and Robert
spent 3 years living in Japan during the Korean War. Upon returning to
Louisiana, they moved to Baton Rouge and Johnnie worked to put Robert through
college at LSU. In 1960 they moved to Texas and lived in Corpus Christi and
Houston until the present time.

Johnnie was a hard worker and she started working at age 12. She worked in
Jonesville at the movie theatre, the Chevrolet dealership, Wishum's Cafe,
and the local dress shop. In Texas she had a successful career in retail
at Foleys (Macys) department stores as a Human Resource manager. She was a
loving wife and mother, doting grandmother, caring aunt, and a dedicated, well
liked, and respected employee. Her family and her career were most
important to her. She never forgot her roots growing up here and as such,
she and Robert came to visit often as this was their true, closest to the heart
"Home".

Those honoring Johnnie as pallbearers will be family and friends.

Visitation will be the evening before the service at Young's Funeral
Home in Jonesville, Friday evening July 15th from 5 to 7 pm.

Memorials may be sent to the Louisiana Baptist Children's Home at
7200 Desiard Street, Monroe, LA 71203.