To share your memory on the wall of William & Ida Dodd, sign in using one of the following options:

William was born on Saturday, February 5, 1938 in Carrollton County, MS to Calvin Elzie Dodd, Sr. and Velma Willoughby Dodd and Ida was born on Tuesday, July 2, 1940 in Saratoga, AR to Herman L. Dodson and Marteel Louise Holland and they both passed away Wednesday, January 6, 2021.

Mr. and Mrs. Dodd, after 64 years of marriage are still together today. They loved riding around making loops with their beloved dog, Mollie, looking for gators. Mr. Dodd proudly served his country in the United States Army and retired after 25 years as a Sgt. First Class. He served in Korea for three tours and was then stationed in Germany for years where he had his first 2 children. He worked hard his whole life, including at the trade school in Ferriday. He was a tough man until he became a grandfather, then his whole life changed to loving on their grandchildren and great-grandchildren and taking care of his dogs. Mrs. Dodd was a loving wife, mother, and friend. She was just as tough as Mr. Dodd keeping up with the kids, house duties, and even working, while her husband would be all around the world.

To leave an online condolence for the family please visit www.youngsfh.com.
Read Less

To send flowers to the family or plant a tree in memory of William & Ida Dodd, please visit our Heartfelt Sympathies Store.

Receive notifications about information and event scheduling for William & Ida

There are no events scheduled. You can still show your support by sending flowers directly to the family, or planting a memorial tree in memory of William & Ida Dodd.
Visit the Heartfelt Sympathies Store

We encourage you to share your most beloved memories of William & Ida here, so that the family and other loved ones can always see it. You can upload cherished photographs, or share your favorite stories, and can even comment on those shared by others.

Karen McCormick and Patricia Arant, With Love, Your PPCD Family, and other have sent flowers to the family of William & Ida Dodd.
Show you care by sending flowers

With Love, Your PPCD Family

Posted Jan 09, 2021 at 08:37pm
With deepest sympathy as you remember your grandparents.

With Love, Your PPCD Family purchased flowers and planted a memorial tree for the family of William & Ida Dodd. Send Flowers

Posted Jan 08, 2021 at 04:07pm
Billy, Cindy and Angie, I am so sorry we lost uncle Carl and aunt Ida Jo. I can't imagine the hole in your hearts right now. Losing a parent is very hard but to lose both I can not wrap my head around. I have fond memories of them both, uncle Carl was always so funny to me. He had a great sense of humor. He was tough but I guess when you are in the military as long as he was then that is what they drive into you. Aunt Ida Jo was always so sweet and kind. I was always amazed at the way they enjoyed each others company and would go ride the roads everyday. It is just something they enjoyed and spent many hours doing. Know that you are in our prayers and we love you.
Kay
Comment Share
Share via: 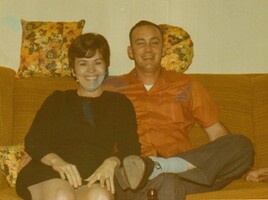